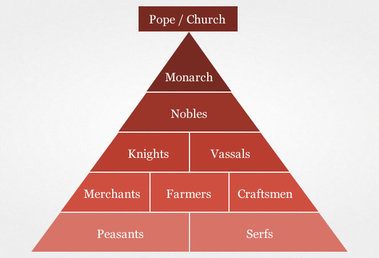 Feudalism divided up people into certain classes.
The feudal systems pyramid of people put royalty first at the top. Then came nobility. The nobles had the most power in the middle ages. Nobility included hereditary nobility and non-hereditary nobility, which included those who rose to power through non-familial means. Hereditary nobility were Barons and Dukes. The main responsibility of a Duke was to be the ruler of a province. He was the highest ranking in nobility. The female equivalent of a Duke was a Duchess.  A Baron was responsible first to his king and second to his people who lived in his manor. The king might require the baron to serve in the military or engage in various activities. Non-hereditary nobility were knights, freedmen, slaves, serfs, clergy, and others. A knight’s primary responsibility, as a vassal, was to aid and protect the lord in his army. They also assisted their lord in court and watched over their lord’s manor. The serfs had no political power and were not allowed to have control over property. They lived on the property that a noble vassal or lord owned. In order to repay the vassal for letting the serf live in his property, the serf is responsible for working the land and was at the disposal of the vassal. Serfs were also known as semi-slaves, as they were slaves in all but name.